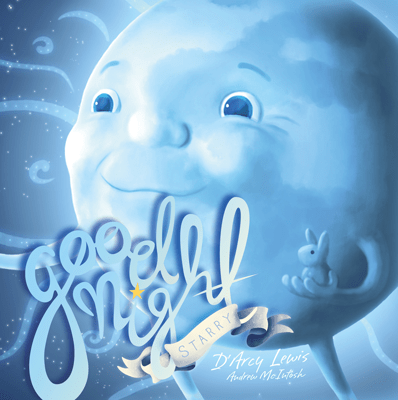 Goodnight Starry is a beautiful bedtime picture book for budding stargazers aged 3-6 years. Snuggling down to sleep, they will discover how the Earth and her family in the solar system watch over them every night. Through saying goodnight, they explore a little of what makes each member of Earth’s celestial family so very, very special.

D’Arcy Lewis was born in Western Australia and his love of starry nights began under the clear desert night skies of Kalgoorlie. Later, in the chilly winter night skies of Canberra, he also discovered the importance of a good pair of thermal underpants. Goodnight Starry is his first children’s story book, through which he hopes to share his curiosity and wonder about the solar system and universe with a new generation of stargazers. He lives in London with his understanding wife and three telescopes.

Andrew McIntosh is a part-time digital illustrator from Melbourne, Australia. Ever since Andrew can remember, he has had a pencil and paper on hand. He started his artistic career in the video games industry focusing on pixel art, 3D modelling and UI design. In his spare time, Andrew paints whimsical characters and scenes which are greatly inspired by nature. Since 2015, Andrew has pursued his aspiration to illustrate children’s books and hopes to write one of his own in the future.