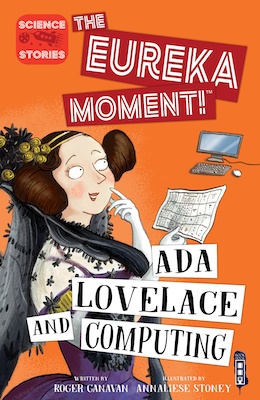 This narrative non-fiction series tells the stories of great moments in science as if through the eyes of the scientists and inventors themselves. The stories are told like an adventure, with all the dramas, missteps and struggles along the way, ultimately leading to the ‘Eureka’ moment of triumph. The books use all the tropes of fiction – dialogue, action, suspense – to tell true-life tales of human discovery and achievement. Readers will discover what happened during these milestones of science – but crucially, they will also be able to imagine what it might have felt like to be at the cutting edge of progress. The narratives are interspersed with short comic strips dramatising significant episodes and boxes to explain scientific concepts, as well as historical information to set the story in a wider context. The end matter contains a timeline, a glossary and an index.
In Ada Lovelace and Computing we follow the daughter of Lord Byron as she overcomes challenges both personal and
scientific, dealing with her mother’s controlling behaviour and the indifference or derision of male scientists to become a pioneering and hugely-important figure in the rise of computertechnology.