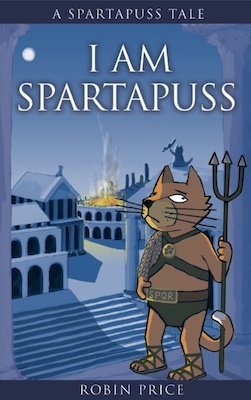 Spartapuss books are set in ancient Rome and Britain in a world ruled by cats! They are filled with marvellous characters and historical detail making them ideal for children aged around 8 years and upwards. Each story can be enjoyed in its own right. Hail Spartapuss!
Rome AD 36. The mighty Feline Empire rules the world. A ginger cat is comfortable managing Rome’s finest Bath and Spa. But Fortune has other plans for him. There’s a nasty incident in the Vomitarium. He’s arrested and imprisoned by Catligula, the Emperor’s heir and favourite. Released into a school for gladiators, he must fight and win his freedom in the arena – before his opponents make dog food out of him.