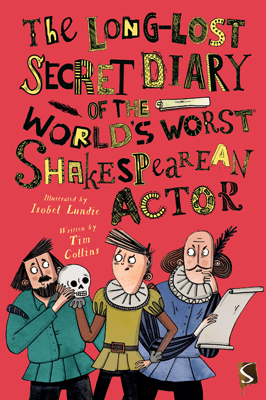 Series:
The Long-Lost Secret Diary Of The World’s Worst…

This series of hilarious fictional diaries put us inside the heads of hapless figures from history in frazzling situations. Robert, a boy living in Southwark in early 17th century London, finds himself employed as an actor in the Globe theatre, playing roles written by the greatest playwright of the age: William Shakespeare. But when the coronation of a new king, James I, threatens the future of the theatre, Robert has to come up with a cunning plan to save the company. If he doesn’t succeed, Robert will have to go back to collecting dog poo for a living.

Will Robert save the day? Will he ever improve at acting? And will Shakespeare ever listen to one of Robert’s brilliant ideas for a play?

‘Get Real’ fact boxes featured throughout, as well as a timeline, historical biographies and a glossary in the endmatter, provide historical context and further information.

Tim Collin’s fiction for children has been translated into forty languages and won awards such as the Manchester Fiction City and The Kalbacher Klapperschlange.

Isobel Lundie graduated from Kingston University in 2015 where she studied Illustration and Animation.